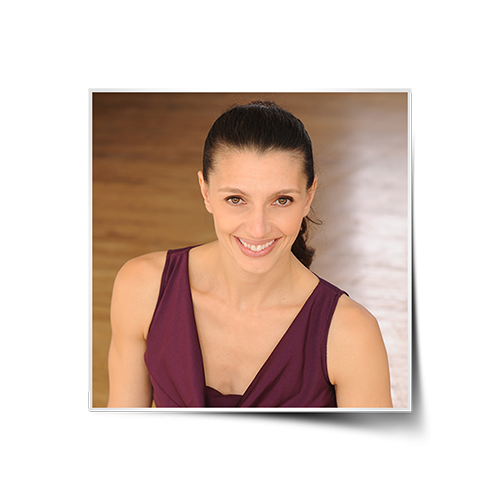 Biography
Complete Background
Where you can find Ilaria

Ilaria Cavagna, a skilled trainer and Pilates instructor, has moved seamlessly from being an athlete, to a performer, to a practitioner of the disciplines she believes in and trains her clients with. The Bachelor of Movement Science achieved in Italy in 1997, the Pilates Certification (where Ilaria completed more than 700 hours) and the recent and innovative SOMA-TRAINING studies give her an understanding of both the beauty and function of the human body when properly trained. She strongly believes in the combination of strength and stretch which provides the body with progressive lifetime improvement. All these disciplines have in common the work on POSTURE which is key for healthy and injury-free bodies! The gravity line, the way we stand and we move is essential to having an efficient and pain free body.

Ilaria Cavagna was competing in rhythmic gymnastics since the age of five as a member of the Italian Gymnastic Program. Her early introduction into this discipline set her on a path of training mind and body to work in concert. This is a thread that has run consistently through her career.
Ilaria was a founding member of Kataklo’, the first Italian dance company to experiment with fusing the expressive gestures of dance with the strength and athleticism of gymnastics. For 11 years she toured around the world with Kataklo’, participating in international events such as the Opening Ceremony of the Winter Olympics in Torino.
Moving to New York in September 2006 Ilaria fell in love with Pilates. She trained at True Pilates New York with the best Romana’s Pilates Master Instructors. Certified in June 2007, she earned a gold card directly from Romana Kryzanowska in recognition of her performance abilities. Ilaria has been the choice of many Pilates instructors to be the demonstrator body and has appeared in magazines including Pilates Style as a contributor as well.
Rehabilitating from her own injury led Ilaria to the benefits and study of E.L.D.O.A. and Myofascial stretching, first as a patient of Dr. Keith Pyne and Ben Velazquez, then as a student, and currently as part of their team of performance specialists at SportsLab NYC. She now incorporates performance rehabilitation, into her knowledge and training of the body. (Soma-training)

Where you can find Ilaria

After working for more than 4 years at True Pilates NY where she has been teaching clients, apprentices and teachers, Ilaria now trains private clients both in the comfort of their homes and in Manhattan Pilates studios. She also works as an exercise rehab specialist at SportsLab NYC and collaborates with Technogym USA for special events and as a trainer in their Soho store location.

What others are saying about Ilaria ?

Take a look to some testimonials

I like and I believe in everything I teach. Having fun at what you are doing is fundamental !

Complete training to change your body and your life !

There are no upcoming events at this time.

to my newsletter and get all the latest news from Ilaria Cavagna.