Are you “Fear Free”?

If anybody out there says yes, I want to meet him/her and know the secrets.

I believe that we all have our little or big fears to deal with going through life.

But the fear that I remember the most was the fear of heights!

No big deal you would think… correct. No big deal if you don’t have to face it in your everyday life or profession. I was part of Kataklo’, an acrobatic dance company based in Italy. For some choreographies we were requested to hang, pull ourselves up, balance and dance at about 4 meters from the floor. It’s not a significant height, I know,  but the idea of potentially falling from that height, was a big challenge for me. My solution? Rehearsing many many times all the potentially dangerous sections of the choreography, by myself and with the partner that was holding me up at times.

The fear became gigantic when Giulia Staccioli (the artistic director and choreographer of Kataklo’) was asked to choreograph a section of the Opening Ceremony of the Winter Olympic games in Torino in 2006. Twenty four dancers were dancing on 3 of the 5 Olympic Rings of De Coubertin, at the height of the 5th floor of a building, in the open. We were secured the most of the time, but there were moments where we had to manually change the secure, and hook a descensor!

I could call it off or decide to do something. I didn’t know how  to solve the problem , but I knew that i didn’t want to let this opportunity fly. I knew I was going to be somehow on those circles high up in the sky on February 8th 2006.

During the rehearsals I was trying to get on those circles as much as possible to get used to it. Sometimes my hands were shaking, sometimes I had a hard time breathing but I was always able to calm myself down and keep going.

I also started working twice a month with a psycho therapist who specialized in fears. That part was really interesting. Most of the work she had me do, was to bring up and think to all the possible bad things that could happen: lose the grip, lose the strength, have the head spinning and lose the balance, falling, smashing myself on the floor…. ANYTHING. Of course I was really good at it!

During this process I was getting more comfortable on the rings and having huge nightmares at night! I was kicking and moving in bed like I never did before and after that period. My fear of heights was becoming more of a “nightmare” and less and less present while I was performing.

Long story short. I made it. I don’t know how, but I made it. I was also able to have fun while dancing up there,  in front of  a crowded stadium and the whole world looking at us. I’ll never forget the emotion I experienced in the final part when the Olympic Circles where up high. Before they flipped, we were letting ourselves descend towards the floor, hooked at a wire, with legs and arms free: I was flying and enjoying it. 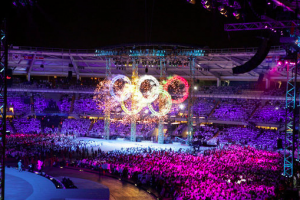 I’m sure the therapy helped but I strongly believe that is the power that our mind has that brings us to do things. I mostly believe in the power of the motivation. That job at the Opening Ceremony meant a lot to me, showing myself and my colleagues that I was able to win my fear.

Motivation, together with the power of your  mind, allows you to do so much more than you  think is possible.

Are you Trying to Lose Fat?

Inaugural Conference on the Isle of Man

There are no upcoming events at this time.